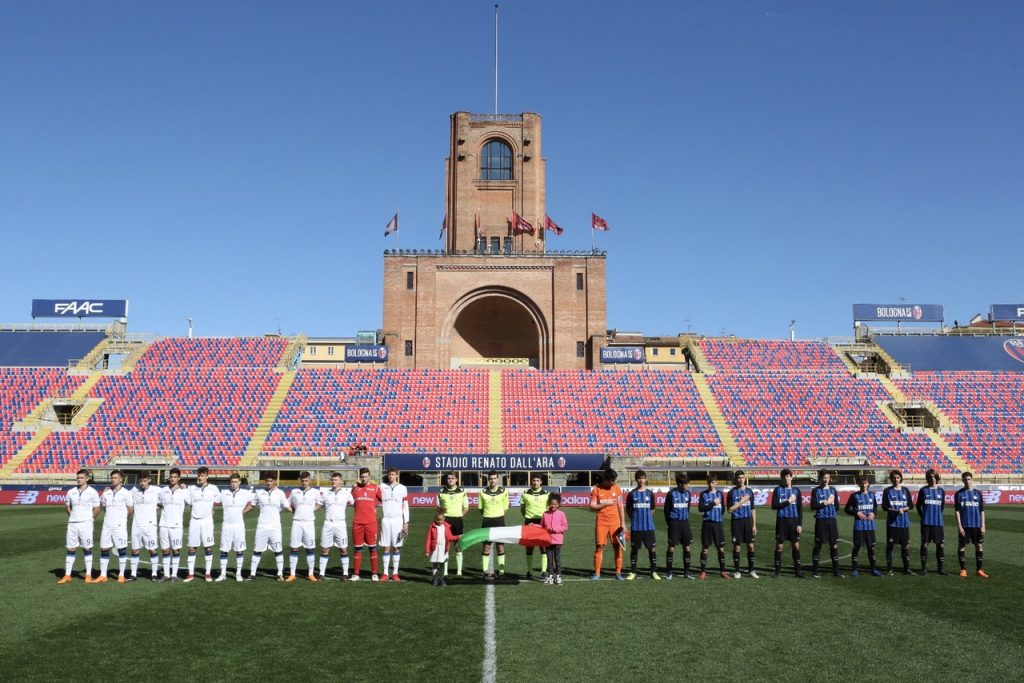 Great show at the “Renato Dall’Ara” for the semi-finals of the international youth tournament under 15. Atalanta bends Inter on penalties, while the Brazilians win at the photo-finish against Ajax after a match full of emotions

The first day at “Dall’Ara” by We Love Football gave emotions to no end. The victory against Atal’s penalties on Inter, which yielded 4-3 after a balanced and very hard game ended on 0-0; then the spectacle of Palmeiras-Ajax, two teams composed of great talents, endowed with excellent technique despite their young age. In the end the Brazilians prevailed thanks to a last-second goal by De Barros.
Tomorrow morning, always at the “Renato Dall’Ara” stadium, the last big day of the tournament: at 9.30 am the women’s final between Roma and Inter; to follow, at 11, the male final between Atalanta and Palmeiras arbitrated by Michael Fabbri of Ravenna.

The penalty lottery rewards Atalanta, in its second consecutive final at “We Love Football”, and condemns Inter. The Bergamo come out victorious at the end of a blocked race, played in an organized way by two strong teams from the defensive point of view but unable to find the right pick to find the way of the network. The first opportunity is for Atalanta, who at 8 ‘close to the goal with Oliveri head: the ball does not find the door defended by Magri. Two minutes later Young – among the best in the field – breaks right and cross, Magri saves everything. The Inter looks forward to 24 ‘with Pucci who downloads for Fabbian, whose right is the response of Rodegari. Shortly after it is Pezzini to engage the orobico goalkeeper with a right from a tight angle. It is the last thrill of the first half. In the second half Inter started better, immediately dangerous with Politi who freed himself with a series of drunken feints and kicked out a little. Inter again in the 14th minute, which almost passed by taking advantage of Rodegari’s insecure exit: the ball hit a defender but did not enter. After the initial outburst, Atalanta picks up the game and in the final, after Rosa’s splendid scissor on Perego’s cross, which comes out slightly, comes close to winning the goal with Lozza, whose header goes off on the flick of a breath . So we go to the penalties, where the errors of Uccellini – still among the best for Inter – and Pucci are decisive. Lozza is cold and gives all’talanta another great day of football at the “Dall’Ara”.

Victory to the last breath for Palmeiras, which in its second appearance at “We Love Football” hits the final beating Ajax in full recovery. decides the challenge De Barros, who takes advantage of a defensive sleep of the “lanceri” and scores from a few steps the goal that gives the final to the boys of Mr. Pereira.
Match full of emotions, that went on stage Sunday afternoon at the Dall’Ara. Ready, via and Maciel, from the right, starts a powerful and precise shot that touches the post. At 10 ‘still Palmeiras, but Van Den Heuvel is over Santana shoots from outside. Ajax is seen at 15 ‘when Braspenning, from a tight angle, unloaded a powerful left direct at the intersection: Martins foils the threat and puts in a corner. At 21 ‘occasional Palmeiras: lost ball on the trocar and immediate verticalization for Maciel who in the area kicked a safe shot, rejects open hands Van Den Heuvel, 2003 class carrier in orbit Manchester City. A minute later Rensch saves on the line on Maciel, then still needs the skill of Van Den Heuvel that anticipates Gondim ahead of the area.
In the second half the pace does not show signs of decline but, apart from the occasion of Maciel on the 2nd, that from inside the area shoots on Ven Den Heuvel, the chances almost all arrive in the final. First is the Palmeiras to be dangerous with Gondim, but his safe shot from inside the area miraculously comes from the usual Van Den Heuvel. The same is Martins a minute later on Chukwu, closing big on the attacker launched on goal by the beautiful assist of Braspenning. When everything seems ready for the penalties, in the last action of the game, the defense dell’Ajax falls asleep and pay duty: long free kick towards the area, the head board and De Barros – all alone – bag by two steps . The referee whistles the end between the tears of joy of Palmeiras and those of despair of Ajax.