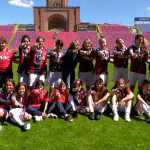 The third edition of the international tournament under 15, scheduled from March 28 to April 2, is enriched with a new all-Italian chapter: eight women’s youth teams will compete to contend for the title. And the “concentrated” formula of the competition promises show.

Eight female teams, all Italian, fighting for the title. This is one of the big news for the 2018 edition of “We Love Football”, an international youth tournament under 15 which returns to Bologna from 28 March to 2 April. The sporting event created by the former rossoblù flag Marco De Marchi, now at the third turning point, has in fact been enriched with a large number of “pink odds”, passing from the last three teams to last year’s eight-year tournament. ‘year. In addition to the 16 male professional formations arrived from all over the world (eight nations involved with the participation of some of the most prestigious international clubs), there will therefore be a large group of girls ready to fight on the field to show off their qualities and their great passion for football.

The women’s tournament, unlike the male one that will develop over six days during the Easter week, provides a “concentrated” formula that promises show. On March 29, starting at 12.00, the millennials of Bologna, Cesena, Inter, Rome, Udinese, Venezia Women and Verona will compete on the artificial grass pitches of the “Enrico Filippetti” sports center in Zola Predosa, giving life to twelve exciting matches . Divided into two groups of four, each team will play three races within a few hours: the first classified of each group will earn the pass for the final, scheduled for April 2 (at 9.30) at the “Renato Dall’Ara”. An award for these small champions of the future, who will probably be able to taste for the first time the emotion of playing in a real stadium.

Defending the 2017 title will be Bologna, once again led by Daniela Tavalazzi. But the task of the rossoblù, who last year dominated the triangular with Cesena and Sassuolo ending unbeaten with 20 goals scored and just 1 immediately, is anything but simple. “We Love football is a great opportunity – explains Daniela Tavalazzi, head of the Bologna women’s sector – because it allows our girls to show their worth in front of an international audience. Furthermore, playing in Bologna by representing the colors of my city is an extra stimulus, as is the fact that this year the tournament includes eight teams. Who knows, maybe in 2019 will also be Barcelona and Real Madrid, it would be nice to be able to compare with high-level world realities. We, however, this year we will try to say our own, it being understood that the objectives, in the youth field, are the growth and the formation of the girls “.

Read the Calendar with the schedule for all 2018 gamesn