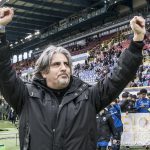 It was March 31st, at 12:30 pm at the Dall’Ara Stadium, the lunch match of the 30th matchday of Serie A Bologna – Rome was staged.

For We Love Football that was a memorable day: Marco De Marchi and a delegation composed of various players and coaches taking part in the third edition of several teams were the protagonists of the pre-race. Former Bologna FC ex-captain De Marchi, as well as president of the “Amici di We Love Football” social promotion association, went under the curve to receive the applause and affection of the rossoblù fans as always happens, but not only , that morning We Love Football shared with the 25 thousand of Dall’Ara the spirit and the positive ideas that it knows how to spread.

It has been explained what really represents our reality and how important it can be to promote it and support it. Applause from all over the stadium and the impression that at least one sign has been left behind. And thinking about it now, that the championship is over, that same stadium is quietly waiting for a new season to start again with the hope that it will be full of emotions.

Hopes, goals and projects like for Bologna FC for We Love Football. Not even the time to stop thinking about how beautiful the third edition was that you are already starting to concretely build the fourth. Marco De Marchi is in fact already in full organization for the 2019 edition: absolute novelties, international agreements and contacts with the teams to be defined.
We Love Football is a project that never stops, every day new ideas are created and developed with one goal: to promote all that is positive about football.

Watch the highlights #video of We Love Football Channel

IF YOU HAVE ADVICE, TESTIMONIALS, PARTICULAR REQUESTS, SUGGESTIONS FOR THE FUTURE, AND YOU HAVE IN MIND ANYTHING THAT CAN HELP THE YOUTH SECTOR, WRITE TOinfo@welovefootball.eu