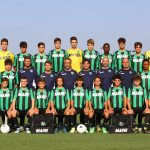 Among the excellences of the Italian football nurseries is certainly the Sassuolo, a company that in addition to having done sensational things recently in Serie A has also invested heavily in the youth sector. The best result was achieved less than a year ago with the success at the Viareggio tournament.

The Sassuolo is a club that believes a lot in the young and the first team of Iachini is the testimony. This year Claude Adjapong has put many presences on the scoresheet, as well as Pol Lirola and Sensi, while in the past years the neroverde shirt has been worn by many young Italians who have become successful champions at Mapei Stadium: just think about Berardi and Politano , but also to Simone Zaza (today at Valencia) and Lorenzo Pellegrini (under Roma).

At the international football tournament under 15 “We Love Football” 2018 is the second time for Sassuolo. Last year the neroverdi caressed the dream of the final, coming out in the semifinals on penalties against Atalanta after a tense match and closed to white nets. This year, included in Girone C with Juventus, Genk and Palmeiras, will try to improve further.