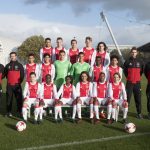 After taking part in the first edition of the under 15 “We Love Football” international football tournament, Ajax returns to Bologna.

The Dutch under-15 selection is one of the best youth sectors in Europe. The football school of the “Lancers” of Amsterdam, in fact, is famous all over the world. And the quality of the Dutch nursery is supported by the facts.

There are many champions who grew up in Ajax who have written important pages in the history of football: Christian Eriksen of Tottenham; Klas Jaan Huntelaar, former Milan and Real Madrid striker; Edwin Van der Sar, historic goalkeeper for Manchester United and Juventus; Wesley Sneijder, former playmaker of Real Madrid and Inter, team with whom he scored the treble in 2010; Edgar Davids, for seven years a great protagonist with Juventus; Clarence Seedorf, winner of four Champions League with three different teams (Ajax, Real Madrid, Milan); Luis Suarez of Barcelona, ​​one of the strongest current strikers in the world; Zlatan Ibrahimovic, one of the strongest strikers in football history. And finally, the most representative of all: Marco Van Basten, Golden Ball with the Milan shirt.

These are just some examples of champions emerging from the cantera of Amsterdam, a nursery constantly monitored by the great European clubs because of the players who manage to churn out year after year. In the 2016 edition Ajax went out on penalties, however, he highlighted some young talents, all Hossein Zamani, at the time elected MVP of the tournament: currently the 2002 class is under the magnifying glass of the observers of prestigious companies around the world. In that edition the “lancers” played in the group Juventus, Atalanta and Paok Salonicco, while this year they were included in Girone D with Atalanta, Sampdoria and Montreal Impact.