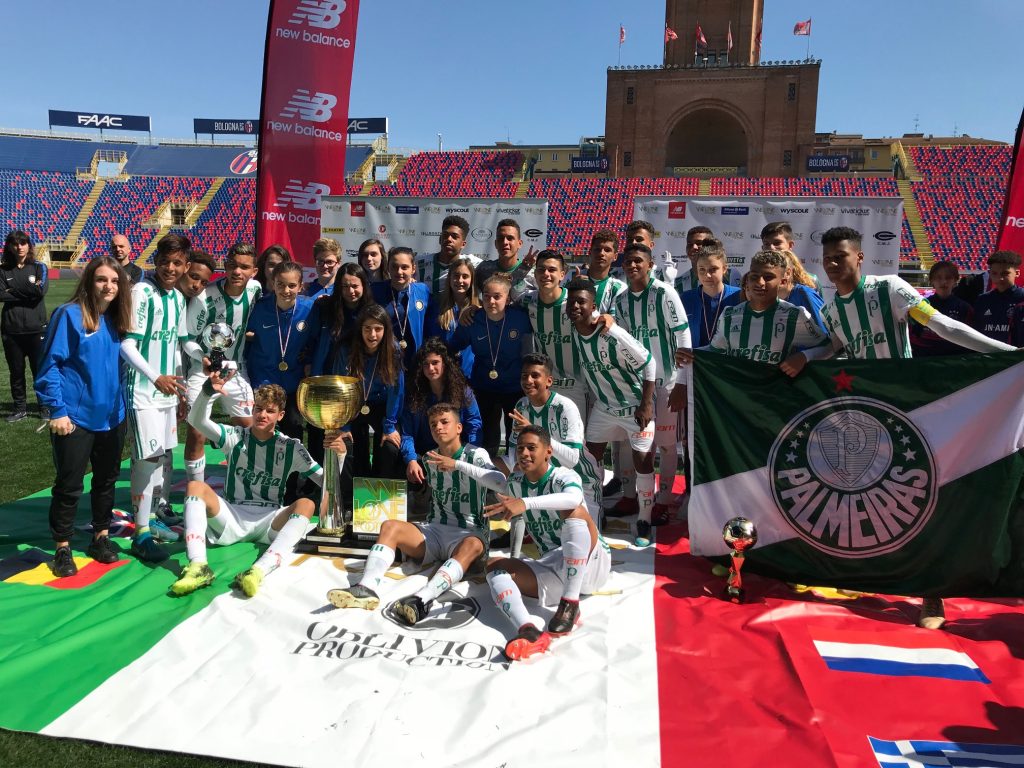 The last day of the third edition of “We Love Football”, an international youth football tournament under 15, did not disappoint expectations. In the men’s final match the Brazilians beat Atalanta 2-1 at the end of an exciting match, while among the girls Inter have the check on AS Roma on penalties after a beautiful comeback

A splendid sun, and the fantastic play of the guys from Palmeiras and Atalanta, illuminated the stadium “Renato Dall’Ara” on Easter Monday. The occasion was not to be missed: the final of the third edition of “We Love Football”, an international youth tournament under 15 designed by the former Bologna flag, Marco Antonio De Marchi and organized by Stefania Tschantret’s Oblivion Production. A final act made even more beautiful dall’antipasto “pink”, the final between Rome and Inter, which preceded the men’s match giving as much show to the public present on the tribunes of “Dall’Ara”, numerous despite the holidays. In the end it was Inter who managed to recover two disadvantaged goals in the regular times and to complete the work by triumphing on penalties. But what most liked everyone present was the spirit that distinguished the event: smiles, fair play and love for sport have made it their masters, in an unforgettable day from the first to the last minute. You just have to wait anxiously for the 2019 edition to relive these wonderful emotions together.

Everything happened at the “Dall’Ara” stadium, for a day the dream theater of these young talents. First the thrill of taking to the field on such a prestigious turf, then the awards under the grandstand with a speaker announcing the name and surname of the winners. All in the company of representatives of various sponsoring organizations (Emilia Romagna Region, Municipality of Bologna, Tper, Regional School Office, Municipality of Zola Predosa, Coni, Figc, Aic, Fomal, Don Mario Campidori Onlus Association, Third World Non-Profit Solidarity Association) ) And partners (New Balance, Allianz, Wyscout, Vivaticket by Best Union, Limonta, Cmj, Uliveto, L’Angelica, QN – Il Resto del Carlino, Typography AG, Fico, Wall Street English) that, year after year, accompany “We Love Football” on this beautiful journey. But also in the company of AvexTheMc, a young Ethiopian rapper who performed at the end of the competitions, unleashing boys and girls of the teams who came to watch the finals.
All that remains is to relive the chronicle of the two splendid games that have sent the third edition of “We Love Football” to the archive. See you next year!

Pure show. On the one hand the super organized football dell’Atalanta, on the other the one of the Palmeiras based on great individuality. The result was a marvelous finale, which fully respected the expectations of the eve. And in the end they won the Brazilians, a goal machine able to manage the games like adults. The personality shown by some paulist players in the middle of the pitch is really impressive. Pedro Lima De Barros stands out from the crowd, he is the author of the decisive goal both in the final and in the semi-finals, skilled both in the management of the ball and in the insertions, but there are many guys of Mr. Pereira who showed off: it is no coincidence that Brazilians have made up of prizes, taking home the title of best goalkeeper (Martins), of the best player of the final (Igor Gabriel Furtado Gondim) and of the best player of the tournament (Ruan Ribeiro Rodrigues). But even among the Atalanta ranks there were no names to be scored on the notebook: Samuel Giovane (best midfielder) and captain Giorgio Scalvini (best defender) have impressed the insiders, like Alessio Rosa, centering from the safe future . For the record, the other prizes went Dillon Hoogerwerf, center of Ajax who has won both the trophy of top scorer (5 goals) and that of best striker, and his coach Nordin Wooter, elected best coach; the fair play prize, finally, went to the Belgians of the Genk.
Returning to the final, the start was all Brazilian brand. The Palmeiras immediately put the Atalanta in trouble thanks to the speed of its three strikers. Rodegari, always careful, foiled a couple of threats but he could not anything at 8 ‘on the strong and accurate shot of Igor Gabriel, freed in the area by a rebound and cold on goal. Paulista advantage and race that seems to get on the most congenial tracks for Palmeiras. Instead, Atalanta reacts to the big, begins to take the field and at 25 ‘is the deserved draw with Rosa, good to crush the perfect cross from the left by Perego. On 1-1 the Bergamo try to crush on the accelerator taking advantage of a moment of tarnishing Brazilians, but we go to rest on the result of parity.
Upon returning to the field, the Palmeiras starts again and takes the reins of the game back into its own hands, becoming dangerous in a couple of circumstances. The Atalanta seems to stand the impact, but at 10 ‘on the action of corner comes the goal that will prove decisive then: the cross from the right generates a pinball in the area, Pedro Lima De Barros is the quickest of all and with a right powerful beats the innocent Rodegari. The Bergamo people try in every way to put things right, but the result does not change anymore. And at the triple whistle of Michael Fabbri of Ravenna, Palmeiras is the champion of the third edition of “We Love Football”.

Once upon a time, then the penalty lottery that rewards Inter and condemns Roma. The final female “We Love Football” gave great emotions. Opposite were the under 15 teams of FC Internazionale and As Roma, two clubs that work very well on the youth sector, as could be seen from this wonderful game. The Roma started very strong, managing to find the double advantage, but the Nerazzurre of mister Ruocco did not give up managing to reassemble and centering the victory on penalties. A suffered triumph, which left a bitter taste in the mouth of the Giallorossi, but left the field with a high head because of the great performance offered.
First time targati Rome. After a few foiled with skill by Ricciardi, at 10 ‘the Giallorossi pass with captain Massimino who, on a corner kick, off at the far post and bag head in the corner. Inter reacted but discovered the side of the counterattack, and Roma took advantage of it with Pezzi, who from the edge of the area was 2-0 with a right-footed shot. It seems over, instead at the beginning of the resumption the changes shuffle the cards on the table and start another game. It is number 10 Gallazzi – awarded as best player of the final and already protagonist in the first half with some valuable offensive sorties – to drag Inter to the rescue. Before halving the disadvantage with a wonderful free-kick that goes under the crossbar; then, in full recovery, makes 2-2 in the melee petrifying the Giallorossi.
It goes to penalties, where goalkeepers – and a bit ‘of tension – stand as protagonists. The 14th shot is the decisive one, and Marengoni scores it: Inter is the champion, Roma must be satisfied with the silver medal.