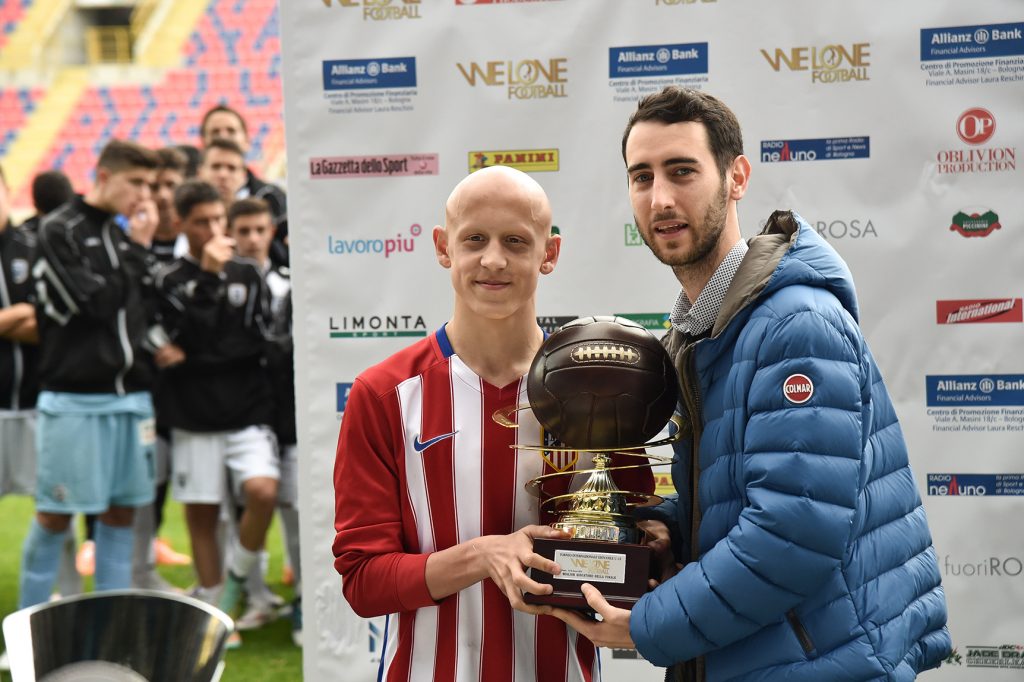 Victor Mollejo, Spanish striker, class of 2001, 17, from Atletico Madrid entered the 64th of the friendly match for the International Champions Cup between PSG and Atletico Madrid, played in Singapore and scored a goal after 11 minutes.

In the first edition (2016), Victor raised the trophy of the Under 15 international youth football tournament We Love Football to the sky of the Renato Dall’Ara stadium in Bologna, and the prize for Best player of the Tournament Final (Marco Pavignani great MAN award with the great passion of Football).
He is absolutely one of the first to have started with the first team and certainly the first to have scored.

After just three years We Love Football is starting to know the first talent passed from Bologna and that slowly begin to become international champions.
Mollejo played with Atletico Under 15, coached by Juan Rodriguez, at Biavati di Corticella, passing group A with Inter, Lokomotiv Zagreb and Bologna, then, after passing fourth and semifinals, the colchoneros won the final against Paok Thessaloniki. Of that first edition Mollejo was an absolute star, he was the best scorer and certainly one of the most promising kids seen during the first edition of the tournament.

For us it is a great pride to see that now the same ones who participated in our tournament score to champions like Areola, goalkeeper of Paris Saint German, in a competition, albeit friendly, internationally such as the International Champions Cup.
In the first team had already made his debut in the last friendly against Arsenal, the second presence has already signed on the scoreboard.

But we also celebrated the seventeen year old Juventus Nicolò Fagioli, who in these days is in the United States with coach of Juventus, Mister Allegri, who are also involved in the International Champions Cup.

Nicolò made his debut in the match against Bayern Monaco replacing in midfield Emre Can, while he also scored in the penalty shoot-out in the second match against Benfica in which Juve then achieved success.
He played in Juventus Under 15 coached by Mister Cei in the first edition of the international under-15 youth football tournament We Love Football 2016 and from this year he will train with Cristiano Ronaldo.

Yeah, it’s really incredible, is not it? This is why we love football and young people.

Good guys, congratulations to all and keep believing always and fighting for your dreams!

Take a look at the #IGTV of We Love Football: we made some very nice video clips on the talents of our #GenerazioneF as Victor Mollejo and Nicolò Fagioli, and soon many other young “players” launched in world football!